Set on the blue waters of the ocean, Baam Boom has all the detailing of an 18th century pirate ship. Harking back to the golden age of piracy, the symbols and graphics pay homage to these 18th century seafarers. It has five reels, three rows, and 20 paylines. The slot game has ten regular pay symbols. The lower paying symbols are represented by standard card suits. The medium paying symbols include barrels, a beer mug, a flintlock pistol, and cannons. The highest paying symbols and wild is a cross of red skeleton bones on a gold cannonball. While the bonus symbol is a white skull on a red tile. This skull changes to red and blue when it becomes a scatter symbol. 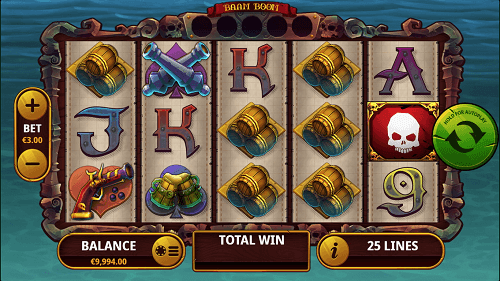 This video slot has tons of features for player’s enjoyment. For a more streamlined gameplay experience, there is the Autoplay mode. There are wild substitutions, a Treasure Chest feature that gives up to 30 free spins, and a bonus feature that triggers when five wilds have been collected. Let’s take a more in depth look at Baam Boom’s bonus features:

Collect three, four, or five white skull bonus symbols which have changed into scatter symbols to trigger this game. Players get either ten, 20, or 30 free spins on top of a coin win of five, 50, or 100 times their bet.

After all the free spins have been used up, Baam Boom takes players to a second game with a treasure map. Players take aim at the map grid and fire cannonballs at places where gems are hidden. These gems award a variety of coin prizes. There are eight prizes on each map but players need to find five to move on to the next map. All in all, there are five map games and the highest a player can win is 166 times the original bet. These are added to free spins wins and previous map games.

The RTP of Baam Boom is a low to medium 96.35%. Also, Playtech didn’t pick the right soundtrack to fit the adventurous pirate-themed game celebrating the golden age of piracy. With bet sizes ranging from 0.30 coins up to 300 coins, this slot game accommodates every budget level. Furthermore, with a win potential at below 1 000x the original bet, Baam Boom isn’t that rewarding if you’re looking for big cash wins. However, those looking for some entertainment will enjoy this slot. Find it at any Playtech powered casinos we feature on our site.