Explore the power of the Ancient Egyptian gods in NetEnt’s Coins of Egypt! Spin the reels covered with all sorts of omens that foretell your success or failure and walk away with a tale worth sharing, as well as some good riches. Read on to learn more. 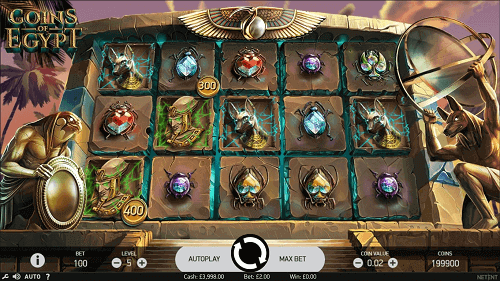 Coins of Egypt is a five-reel, three-row slot game with 20 paylines. As previously mentioned, this NetEnt game makes use of an Ancient Egyptian theme (the theme all classic slots are made of) and makes use of stunning 3D graphics. The reels are stylised in a very theme-appropriate manner in that they are made entirely of stone.

The title’s symbols are made up of only theme-related icons. As one may expect from a game of an Egyptian theme, the symbols are made up of multicoloured scarabs along with some famous mythological gods, including Anubis, Bastet, Wadjet and Isis. There is a wild to help players finish winning combinations, and it is illustrated by an oddly designed insect. There are also two bonus symbols (the Pharaoh’s head and the interesting coin), which activate the game’s two bonus modes.

Coins of Egypt features two major bonus modes. The first is that of the Pharaoh’s Coins instant bonus. Players will notice that some symbols feature coin values imprinted on them that total to anything between 2x and 15x your initial bet. If the Pharaoh’s head symbol appears on the fifth reel, players are awarded the all the coin bonus featured on the reels.

The second bonus is one of a more traditional nature in that it is a free spins bonus. Players trigger this game mode by landing three scatter symbols on the reels. Three chests featuring an eagle, a snake and a cat will then appear on the screen, and any coins featured on the screen will be added to each of them. If throughout the free spins bonus mode, players are able to land three symbols featuring any of these three animals on the reels, they will be added the coin prize in addition to their overall winnings.

Coins of Egypt is sure to provide all South African players with an exciting gaming experience. The title features a unique take on the classic Ancient Egyptian-theme and offers gamblers an inviting RTP percentage at 96.97%.