Fisticuffs is one of the cool and awesome slots powered by NetEnt. It is a colourful boxing-themed 5 reel video slot with 10 pay lines. The game has top notch graphics making it fun to play. This slot has taken the hearts of many online gamblers.  Fisticuffs graphics include symbols that you expect in a boxing gym. The two wilds in this slot are funny looking boxers. This game also includes gym sounds and boxing sounds and these sounds are superb for great real money gaming experience. 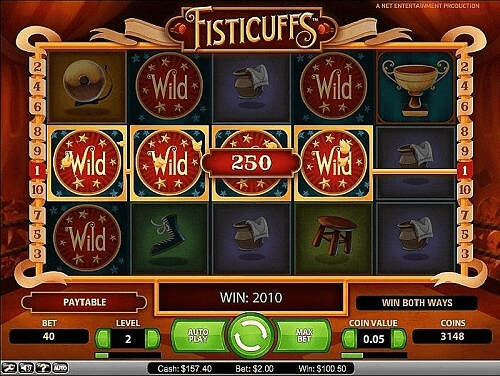 How to Play Fisticuff at an Online Casino

Fisticuffs has got the All-Ways-Pay feature, however, it is a common feature on most gaming slots from NetEnt. This feature only means that you will win from left to right and from right to left over all the ten pay lines that you find in this slot. There’s is every reason for you to win.

Fisticuffs has a lot of cool features to make the gameplay more exciting when playing this game. These include the boxing symbols such as a bell, corner stool, boxing gloves, various boxers, and characters. If you love boxing definitely Fisticuffs was developed for you.

Before playing the boxing match you should first select your bet level using Level selector and select coin value. Spin button makes the game starts and Max Bet wagers the maximum bet. The boxing feature is triggered by two wild symbols appearing on the reels. There is also the fat boxer which appears on reel 3, the scrawny boxer can also appear on reel 2 and 4. A round of boxing supervenes if these appear at the same time. A couple symbols will change into wilds and a re-spin is automatically triggered and an intriguing online gambling experience will be provided to you. A stack of wilds on reels 1 and 5 is stopped with sticky wilds during the re-spin.  This game has the autoplay feature allowing the spinning of the reels without any interruption.

Fisticuffs is fun to play nonetheless some players find its gameplay not matching up with its appearance. The gameplay is just too good. The fascinating thing about Fisticuffs is the collection of wilds like regular and diagonal wilds activated on flanking reels.