Panda’s Gold is the latest Realtime Gaming (RTG) slot to join the developers game library of hundreds of video slot games. We review the slot game and hopefully it’s as entertaining as the giant panda its named after. 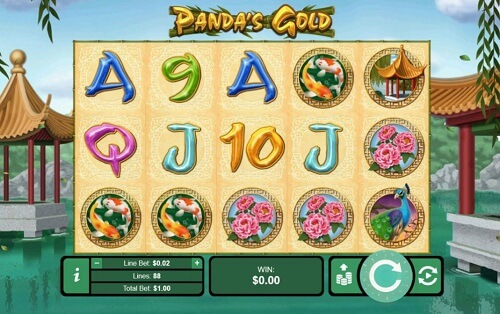 Realtime Gaming’s latest addition is a Chinese-themed five-reel, three-row video slot game. It’s set in the Sichuan province of China, known for its giant pandas. Seems like a rewarding game with a whopping 88 paylines.

Set in the mountainous forests, Panda’s Gold takes you deep into the forests of the Far East. Cards from the nine to Ace are stylised in a Chinese-character font. There’s koi carp, a golden bowl, bamboo and flowers, colourful birds and peacocks, and temples in the background. The panda is the wild symbol, and the Fortune symbol acts as the scatter.

Panda’s Gold has five reels, three rows, 88 paylines, and a 50 000 coin non-progressive jackpot up for grabs. To begin, you will have to choose one of three free spins options. These award up to eight free spins with re-spins which are triggered by three or four Fortune scatters. Furthermore, the scatters activate eight extra free games if three or more of Fortune symbols appear in a free game. These Fortune symbols also trigger re-spins, Prosperity, Wealth, and Fortune free games. These free games have multipliers of up to eight times. The panda wild symbol completes winning combinations when it replaces symbols next to. Look out for five colourful birds. These payout the top cash prize which is a maximum bet of 888 coins.

With three distinct free games with their own free spins and bonuses, Panda’s Gold doesn’t hold back on the rewards. The theme might not be novel, but the frequent interactive bonus rounds and exciting character action makes it entertaining.

Look out for Panda’s Gold at Casino ZA’s recommended top casino sites, as well as other new additions.