Pink Panther is an internet casino game developed by Playtech Software. This is one of the most prominent gaming software developers. The game has 40 pay lines on five reels. 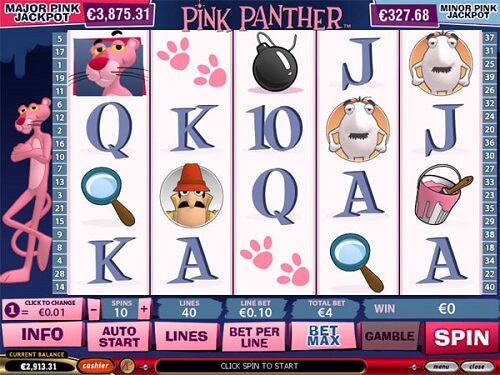 Play Now
High-quality standards were maintained in the visuals of the game. This game is comic themed with a whole lot of comic characters. The Pink Panther slot has got cartoon graphics. Symbols that you find on this slot are the Pink Panther character, Inspector Clouseau and Little Man.

Pink Panther is the wild symbol in this slot while the scatter symbol of this slot is the Pawprint.

The AutoPlay is a very convenient feature that allows the game to play several times without any input from the gamblers. Max bet allows you to bet 10 coins on all 40 pay lines, this is the highest bet.
There is the Pink Bow feature which is a bonus featured triggered randomly during the game. During this bonus feature, the Pink Panther will blow up between two to six symbols and turn them into wild symbols resulting in wins.

Crack the Pink Code bonus feature is randomly triggered. There are 10 safes which will be opened by the Pink Panther. They contain free spins, multipliers or an expanding wild on reel three. You can be awarded from ten to 29 free spins and these will have a 2X multiplier.

There is also the Colour Pink bonus on this slot which also triggers randomly. Lastly, there is the Pink Trial bonus feature.

This is a very intriguing slot which is quite fun with its high-quality graphics. The chances of winning are quite good giving good rewards to both high rollers and low budgeted gamblers. Making Pink Panther a game that players should play on a regular basis.