Set in a 1950s diner, Ritchie Valens La Bamba slot game pays homage to the chicano rock pioneer. Centred around his breakthrough hit La Bamba, this game is full of the rock n roll fun of the era. 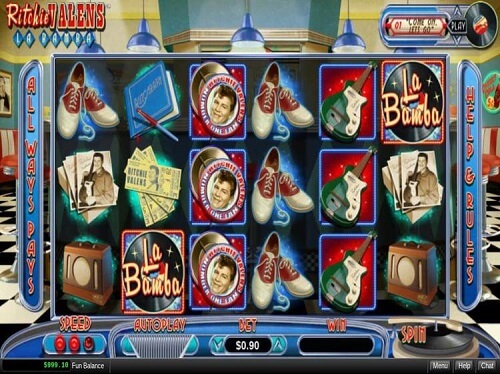 Play Now
The background of the game is a classic 50s diner with the iconic black-and-white checked floor and red leather booths. Ritchie Valens La Bamba is a six-reel video slot game designed by Realtime Gaming. The classic photo of Ritchie Valens playing the guitar acts as the expanding Wild while the La Bamba vinyl with its cover is the Scatter symbol. Lastly, the other symbols on the slots include an electric guitar, tickets to a Valens concert, dancing shoes, and a 50s gramophone as the spin button.

When Ritchie Valens appears as the Wild, he expands to cover the reel and doubles your prize. The La Bamba record Scatter wins are added to your All Ways Pays payline winnings and are multiplied by your total bet. If you get four or more scatters, the screen is transformed into a stage. This then triggers the Ritchie Valens free games feature which gives you up to 20 free games with multipliers of up to three times your bet. On Ritchie Valens La Bamba, you can win up to 6 000 times the original stake on your bet. There is a 96% Return to Player percentage as well. This game is also available on all mobile devices so you can take the rocking game where ever you go.

RTG made the Ritchie Valens La Bamba slot game come alive with colourful retro design and 50s rock n roll. The fixed jackpot and 6 000 times bet per payline winnings would be meagre if it were not for the all the free games and multipliers. Playing the game for long sessions can become stale, but if you are into retro rock and Ritchie Valens’ hit, you will enjoy this online slot game.