South Park: Reel Chaos is a 20 pay line video slot which is powered by NetEnt in association with South Park Studios. There is an artificial atmosphere of terror that is brought by the sounds that will be coming from the game. The graphics in this slot are crystal clear, this is the slot that is believed to be setting the benchmark for NetEnt in terms of the graphics. Symbols that you find on the reels are A, K, Q, J, 10 and the game’s character which include Cartman, Kenny, Kyle and Stan. Professor Chaos is the highest paying symbol in this slot. 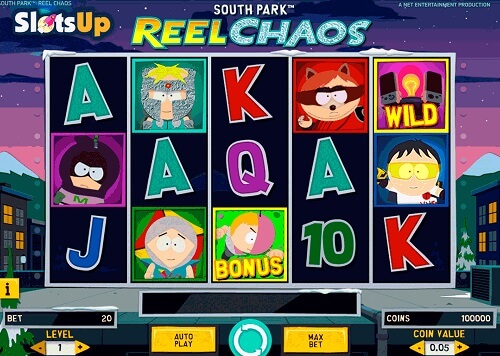 How to Play South Park: Reel Chaos and Features

The theme of South Park: Reel Chaos is based on interesting gang fights. To play this slot game you initially make your bets. Bets level is set using the Level selector which allows you to choose your preferred bet. The coin size ranges from 0.01 to 0.5. This is selected by pressing the Coin Value buttons. You need to press “Spin” to start the game. You can choose to bet one by one or select Max Bet to set the highest bet and have uninterrupted gameplay.

There are special superhero names and functions that you find in this slot game. These include Cartman ‘’The Coon’’ and this is a feature which is activated randomly during the game. The Coon will use Cartman’s stacked wilds to catch General Disarray. Furthermore, there is also Kenny ‘’Mysterion’’ and this will activate Kenny’s multiplier and a betting line win during this spin will give a multiplier of 3x, 4x or 5X.

Kyle ‘’Human Kite’’ is also another feature activated in the main game where Kyle will be using his laser eyes for various functions. He will clear the reels of evil minions to create Kyle’s overlay Wilds.