Banana Jones by Realtime Gaming (RTG) is an innovative slot with an adorable hero. They’ve combined the playability of board games and the excitement of a slot machine to make something that’s truly unique. Join Banana Jones on his quest to keep the powerful Crystal Banana out of the evil hands of his enemies, Leopold the leopard. Read on for more on this wonderfully unique slot game.

The graphics are pretty simplistic yet offer a cute style that’s propped up by an equally cute soundtrack. Navigate your way across the Lilly pads floating on a swamp in this snakes-and-ladders type of game. You have to be careful though, you’re surrounded by snakes that can strike at any time. The game’s reels, which are more of a board game, have treasure chests that either have gems on them or are empty. Landing on a vine makes you climb up while landing on a snake makes you slide down. 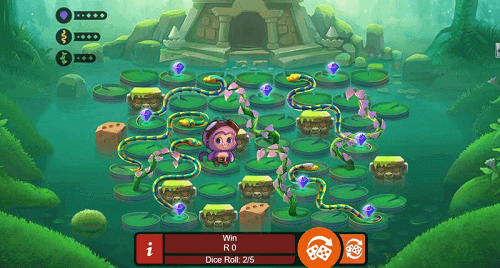 With the five-reels and three rows, there are no paylines on Banana Jones. Firstly, players have to select their wager size between $0.20 and $5. Then you roll the dice five times. Then Banana Jones moves across the board depending on how you rolled. As mentioned earlier, landing on a Lilly pad with a vine move you up and closer to the temple. While a pad with a snake moves you down away from it. If you land on a snake or a vine twice in a single turn, this will double the payout at the end.

Furthermore, there are three bonus modes in Banana Jones.
• Firstly, there’s a special area on the board that looks like a dice. Land on this space and you’ll win an extra dice roll which equals more chances to win payouts.
• Then there’s the Treasure Wheel. This wheel is activated by seven spaces on the board. If you land on one of them, they’ll spin the Treasure Wheel and you could win a 50x multiplier on your bet.
• The third and final bonus mode is the most rewarding one. It’s called the Crystal Banana quest. To activate it, you’ll have to get Banana Jones to the end of the board. Here you’ll have to choose chests with crystal fruits until you match three fruits. The prize you get depends on the fruit you matched.

The game is a bit slow to play, unless you play the max $5 bet every time, which quickly depletes your bankroll. However, the innovative playability of this RTG game doesn’t feel like a slot machine but a cute board game. We enjoyed that aspect, especially if you’re bored of the traditional slot games on offer. CasinoZA.com gives Banana Jones a four of five stars.

For more on the latest slots in SA, visit CasinoZA.com’s slot review section.