Go on a deep-sea adventure with Fish Catch, a unique offering from Realtime Gaming (RTG). There are no reels, winning combinations, and paylines in this game. Instead you’re a diver shooting guns under water hoping to land that big catch and win big cash prizes. Catch the mermaid and you’ll activate a bonus feature that will keep up your collection of prizes. In total, Fish Catch gives a maximum payout of 1 000 times your bet. Read on for more on this ocean-inspired game.

You’ll be floating under water, shooting at 20 different species of fish, each with a prize attached to it. You’ll be aiming what we can assume is a harpoon at under water creatures such as the swordfish, clownfish, squid, and mermaid to name a few. Furthermore, there are six different types of weapons you can choose from to shoot at the different fish symbols. 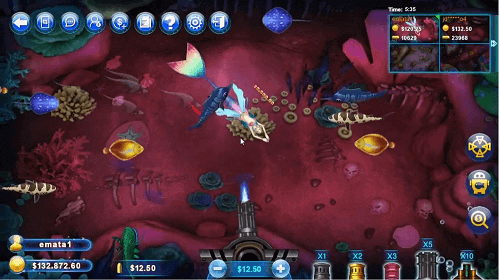 Fish Catch is not only revolutionising the playability of online slot games. They also included a multiplayer feature which can hold up to four players in the same game. Firstly, you’ll have to set a betting range. This, ladies and gentlemen, is the only thing that relates Fish Catch to a slot game. The rest is completely different. The fish swim around freely in front of you. Choose wisely which fish you shoot – each species has its own value. Furthermore, you’ll need to pick the right cannon because they have different power levels and also offer different multipliers.

So, when playing the game, you may have to shoot the fish multiple times before it loses strength. Once this happens, a net will fall on it and you get a payout. There’s a Mermaid’s Luck feature. This is randomly triggered and once it starts, a roulette wheel appears and spins, adding winnings to your catch.

Fish Catch is available on mobile apps. Unfortunately, it doesn’t have a free demo mode.

Fish Catch as a concept is definitely something that we hope to see more of, with a bit more refinement. This RTG creation feels more like an arcade game than a slot machine. That can either be a good thing or a bad thing depending on what you’re looking for. We at CasinoZA.com give Fish Catch a 4/5 stars rating.

For more on the latest slots in SA, visit CasinoZA’s slot reviews.