Take a trip to the heavens on Ancient China in Plentiful Treasure, the latest progressive video slot game from Realtime Gaming (RTG). This opulent game features gold and four Chinese gods looking to bestow their heavenly riches to any South African players willing to give these reels a spin. Can you please the gods and win your fortune? Play in demo mode for free and for real money at any of our top RTG powered South African casinos.

Since Plentiful Treasure is about bao (treasure in Chinese), RTG has created a video slot game that is visually lavish. The reels are set on a red silken background. It is decorated with sacks of gold coins. The four gods featured in this slot game represent the four jackpots players can win. Gold coins on a string, bejewelled three-legged pot, gold teapot, ring, necklace, caskets, pearl, and golden dragon boxes make up Plentiful Treasure’s high paying symbols. On the other hand, the standard playing cards represent the low paying symbols. There are two wilds in this game: the bao symbol and the pearl. The three-legged pot is the scatter. 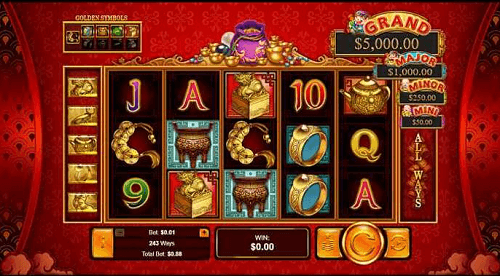 Plentiful Treasure is divided into five reels, three rows, with 243 ways to win. Players can win up to 50 000 times their original bet with its progressive jackpot. Along with the high paying symbols, the pearl wild acts as a x5 multiplier when it’s part of a winning combination. Furthermore, the bao wild randomly triggers the gold coin feature which gets one of the four gods i.e. the four jackpots. Players will have to pick three matching coins out of 12 possible options for a Mini, Minor, Major, or Grand jackpot.

Landing three or more pot scatters gives players eight free spins. These can be retriggered during a free round, giving even more rewards.

There are plenty of slot games out there based on Ancient China. But Plentiful Treasure makes good use of the Chinese aesthetic. RTG may have slacked a bit when it came to using the generic symbols but the game is rewarding, with an authentic soundtrack. Furthermore, there are four great possible jackpots to win on the progressive jackpot. We give this video slot a 4/5 because of all the bonus features we enjoyed.